The Reparations Committee is a subcommittee of the Diocesan Council of the Episcopal Diocese of Long Island. Its mission is to "strive for justice and peace among all people, and respect the dignity of every human being.”

The committee was formed in response to the Episcopal Church’s commitment “to become a transformed, anti-racist church and to work toward healing, reconciliation, and a restoration of wholeness to the family of God.” The Committee formed the Barbara C. Harris Scholars Program at the request of Bishop Provenzano with the intent to further equity in education.

HOW WAS THE REPARATIONS COMMITTEE FORMED?

In March 2021, the Right Reverend Lawrence C. Provenzano, the Bishop of the Episcopal Diocese of Long Island, charged members of the Reparations Committee to design a program to present academic scholarships and trade union fee awards to the descendants of enslaved African people in the Diaspora. Reparations committee members developed a system to grant these awards to applicants residing with the borders of our Diocese. This includes the New York City Boroughs of Brooklyn and Queens, and Nassau and Suffolk Counties on Long Island. Recipients are not required to be members of the Episcopal Church, but they must live within The Episcopal Diocese of Long Island.

THE BARBARA C. HARRIS SCHOLARS PROGRAM FOR TRUTH AND REPARATIONS

This scholarship program is named in honor of the life, legacy, and ordained ministry of the Right Reverend Barbara C. Harris, the first woman of African-American descent to be consecrated as a bishop in the Anglican Communion.

The Barbara C. Harris Scholars Program aims to promote equity in education by providing financial assistance to Blacks, African Americans and Caribbean-Americans, who are African Descendants of Slavery in the United States.

The Barbara C. Harris Scholars Program awards will be presented to its recipients on at this service.

The Reparations Committee will also offer a contribution to both Voorhees College and Saint Augustine's University, the two Episcopal Historically Black Colleges and Universities founded by The Episcopal Church. Both schools were founded for the education of freed formerly enslaved people. 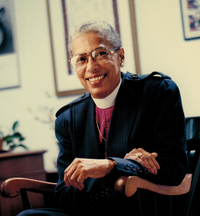 Barbara Clementine Harris was born on June 12, 1930, in Philadelphia, Pennsylvania. Harris, whose maternal great-grandmother, Ida Brauner Sembley, was born into slavery, was active in the Civil Rights Movement of the nineteen sixties. She was a member of the Episcopal Society for Cultural and Racial Unity (ESCRU), and the National Council of Churches’ Delta Ministry. She participated in the Freedom Rides, as well as traveled to Greenville, Mississippi to register Black voters. Harris also marched alongside thousands of nonviolent demonstrators to the steps of the capitol in Montgomery, Alabama as part of the Selma to Montgomery March lead by The Reverend Dr. Martin Luther King, Jr.. At the time of her death, March 13, 2020, Harris served as Bishop Suffragan of the Episcopal Diocese of Massachusetts.

Bishop Harris was a remarkable woman; one of God's chosen to bring change and advocate for the inclusion of women, Black people, and LGBTQ+ individuals who had been marginalized and discriminated against. Her advocacy brought about historic change to the Episcopal Church and its leadership hierarchy. 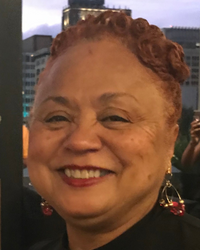 Committee Chair, Penny Allen Grinage, is a life-long member of St. Stephen and St. Martin’s Church in Brooklyn. She has served as a lay leader in her church as both warden and vestry person. She worked for 12 years as an elementary school principal with the NYC Department of Education and retired after 34 years as an educator. She also worked as an adjunct professor for Touro College and as an educational consultant. She holds a Master’s degree in Special Education and a Master’s degree in School Administration and Supervision. She currently serves on the Diocesan Council, the Reparations subcommittee, as a board member of Episcopal Ministries of Long Island (EMLI) and on the Grant Review Committee. She is also active in her sorority, Delta Sigma Theta, Inc., and the Union of Black Episcopalians (UBE). 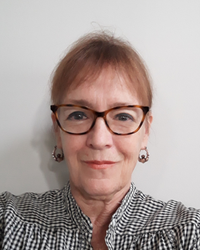 Dr. Dee J. Laffin has been an active member of St. Paul’s Patchogue for 34 years. She has served as a member and Jr. Warden of their Vestry and presently serves on Diocesan Council. Co-chair of the Buildings and Grounds Committee, she most recently was a member of the Bishop’s Taskforce on Reopening. Dr. Laffin holds a Bachelor’s degree from Cornell University, Master’s degrees from the University of Maryland and SUNY Stony Brook, and a Doctorate in Higher Education from Nova Southeastern University. 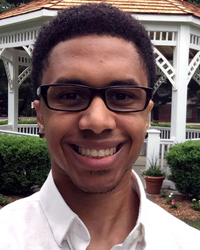 Merrick K. Williams is a steward of the Cathedral of the Incarnation, and currently serves on The Reparations Committee, a subcommittee of the Diocesan Council at the Episcopal Diocese of Long Island. He formerly served on Racial Justice & Reconciliation Commission. In addition, Williams was appointed to the Task Force that Responds to the Opioid Epidemic; created by a resolution passed at the 79th General Convention of The Episcopal Church. Williams was previously awarded the Church Club of New York’s inaugural Young Adult of the Year Award for Service Recognition.

The Rev. John Shirley is currently the rector of St. Mary’s, Lake Ronkonkoma.  Before his time at St. Mary’s, Fr. John served as curate at the Church of St. Luke & St. Matthew, Clinton Hill, Brooklyn. He also serves on the Diocesan Council, is a member of the diocesan Latino/Hispanic Commission, and serves on the diocesan #MeToo committee.

To be eligible for consideration applicants must be:

Scholarship recipients, in order to qualify for a second semester Barbara C. Harris Scholars award, must submit an official college transcript demonstrating they maintained a minimum 3.0 grade point average (GPA) on a 4.0 scale (or the equivalent).