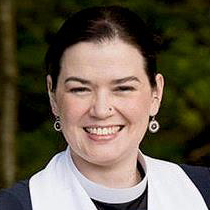 The Reverend Lauren T. McLeavey (Mother Lauren) has accepted the call to become the next rector of St. Stephen’s. Her official first day is Sunday, October 6th.

A native of Massachusetts, Mother Lauren was heavily involved in church youth activities. After high school, she attended Syracuse University and was the president of the Episcopal Campus Ministry there.

After graduating from college, she moved to Queens and joined Zion Episcopal Church in Douglaston, where she taught Sunday School, was on the Vestry, and became Senior Warden at age 25. She attended General Theological Seminary, graduating in 2013. She was also ordained and married in that year.

In 2016, she and her husband moved back to Massachusetts and she became the rector of St. Anne’s in North Billerica, MA.